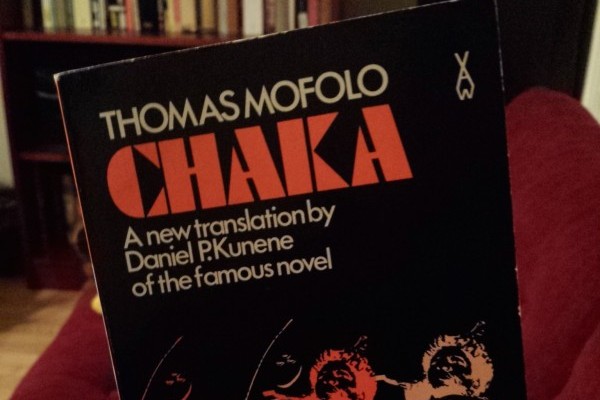 Who doesn’t love a good story about the rise and fall of empires, blended with a spicy bit of romance and the gothic intensity of a mad king?

Chaka, by Lesotho writer Thomas Mofolo, is that kind of novel – a weird and gripping tale about one of the most enigmatic figures in African history.

“I do not believe,” Mofolo writes, “that there was ever a human being whose life was as full of mystery as that of Chaka.” An attempt to capture this mystery led Mofolo to write Chaka in 1910. But his missionary publishers were so freaked out by the novel that they refused to publish it until 1925.

Chaka is the guy who grew up knowing that everyone, except his mother, wanted him dead. Tough luck for a kid born near perfect. Tall, handsome, brave, hardworking, and self-sacrificing, Chaka could not understand why everyone hated him. Like any oppressed soul, Chaka believed that things would change since right and justice was on his side. That illusion faded away when he heard his father order his death even as he stared Chaka in the eye.

Chaka is on the run from assassins when he meets one of the most ruthless witchdoctors that ever graced the pages of an African novel. Isanusi is the guy who makes things happen. He is the magician, the sorcerer, the therapist, the priest, the conman, the strategist, the visionary, the confidante, the doctor, the hit-man, the fixer—the everything man – that every great empire-builder in history has had by his side. The novel is worth reading just to see Isanusi at work.

He’s the one who “inoculates” Chaka with the “medicine of blood.” “If you do not spill blood,” Isanusi explains to Chaka, “it will turn against you and kill you instead. Your sole purpose should be to kill without mercy, and thus clear the path that leads to the glory of your kingship.”

Isanusi turns Chaka into a killing machine. A man who had been hunted all his life had returned to bring the world to its knees.

Mofolo’s novel is a dark, mysterious, and poetic critique of the principle of violence that defines all empires.

By living up to this mandate to kill or be killed, Chaka instituted a political order never before imagined in his part of the world. But the blood on which his beautiful empire is built does not stay still forever. Chaka is eventually consumed by the violence that made him king and lives out the rest of his days in what Wole Soyinka has described as schizophrenia. The story of great emperors gone mad is old and familiar, but Mofolo tells it with all the dark, romantic flair of an African storyteller – sorcery, the supernatural, graphic violence, and tragic love.

No story about war and empire is complete without a special someone. The love of Chaka’s life is the “amazingly beautiful” Noliwa—the girl with the “light brown complexion like a cannabis seed.” How Chaka screwed things up with such a goddess of a woman is a depressing and perplexing story. It is easily one of the most sublime moments in the history of modern African tragedy.

If Achebe had not happened, Mofolo’s Chaka would have been the Things Fall Apart of our generation. There are novelists in Africa – a multitude of novelists. But there’s only a handful of storytellers. Achebe was one. Mofolo was another.

Anyone who loves a damn good story should partake of Mofolo’s dark and quirky love song to a king who inspired a continent and paid the ultimate price.