Mention African style and the fashion crowd thinks Lagos, or Johannesburg. But Uganda’s emerging designers – using a mix of local craft and global savvy – are hoping to give them a run for their money.

Fashion in the east African nation may be viewed as frivolous by many, with the industry under resourced and local designers facing fierce competition from cheaper secondhand clothes and Chinese imports.

But tickets for Kampala’s first ever Fashion Week earlier this month sold out swiftly, with models strutting the catwalk showing everything from sequined hot pants to accessories made from cow horn, to a dress made from the country’s unique bark cloth.

“In so many ways anything to do with being artistic is a struggle here, people don’t take it seriously,” said Ugandan-born designer Jose Hendo, now based in Britain, who showcased her work in Africa for the first time at the show.

It follows similar successful recent fashion weeks in Burundi and Rwanda, while Kenya’s opens this week in Nairobi, as east Africa moves to boost its stake among the continent’s designers.

The show had international backing, with the same production crew – LDJ Productions – who provide technical support for New York Fashion Week helping out in Kampala.

De Jong said Uganda’s talented designers and others working in the industry could offer the country a “huge, huge economic boost” if supported more.

The Kampala Fashion Week show featured 10 Ugandan women and menswear designers, many self-taught, and marked a comeback for Natasha Karugire, the daughter of President Yoweri Museveni.

“My prayer and hope is that Ugandans will all wear our own clothes and that the second hand clothes market will fizzle out of our society,” said Karugire, whose label J&kainembabazi sent out bright, floral dresses with traditional beading at the collar.

‘Big earner’
Hendo’s collection for the show featured jackets, trousers, coats, headpieces and other accessories made out of the bark cloth from local trees, mixed with cotton, silk and denim.

The award-winning ethical designer came up with the idea of using bark cloth after a 2001 trip to Uganda with her family.

“I spoke to my mother and realised there’s so much to it, it is not just about making tourist souvenirs,” said Hendo, who has developed far more complex designs than the ubiquitous bark cloth hats and place mats usually on sale.

“What is exciting is that it is organic, the process of making it has never changed in 600 years.”

In Uganda’s royal kingdom Buganda, bark cloth is worn for coronations and other important cultural ceremonies. Making it is an ancient craft, listed on Unesco’s “Intangible Cultural Heritage of Humanity.”

Hendo is now selling her creations in Uganda and Britain, where she has three shops.

Aamito, 21, had a “humble” upbringing in northern Uganda, before winning the African franchise of the “Next Top Model” reality TV show earlier this year. The beauty is now signed to an elite agency in New York, where she lives.

But she said her family had been doubtful of her career choice at first, telling her that “‘you need to be a lawyer, you need to study and be something, because if you’re a model you’re not anything’,” she told AFP.

“Most people do not take fashion seriously” in Uganda, she said, but insisted the trade could “definitely be a big earner” for the nation.

Local sector
Kampala Fashion Week founder Gloria Wavammuno (29), said her tailor aunts, who lived during the era of dictator Idi Amin – a time of “very long skirts and no trousers” – were supporting their families through the local trade.

“One of my aunts is sending her children to very good schools, two of them have gone to college in America and Canada,” she said.

Some designers travel to China to source their fabrics but Wavammuno wants to support the local sector.

Wavammuno, who interned for British men’s designer Ozwald Boateng and has participated in fashion weeks in New York and Paris, showed off her jackets, raincoats and “woolly things” made from “furniture materials for sofas and curtains.”

They were teamed with sandals, handbags and collars created from Uganda’s famous giant Ankole cow horn and fish, sheep and cow leather.

Designers are hopeful, even though Wavammuno admits Uganda’s fashion industry is starved of resources.

These clothing and jewellery collections from African fashion labels speak for themselves. If you’re looking for sartorial inspiration different from the red carpet and magazine pages, you’re bound to find them here.

Jason Porshe is a luxury bespoke Nigerian menswear brand. The latest collection ‘Skyfall’ – tagged as a glorious return to the 20s by the creative director Jason Samuel – is stylish, classy, old-school and vintage. It includes tuxedos, plaid trousers, trench coats, detailed coats, and elegant suits with a colour palette that varies from classical to neutral shades. 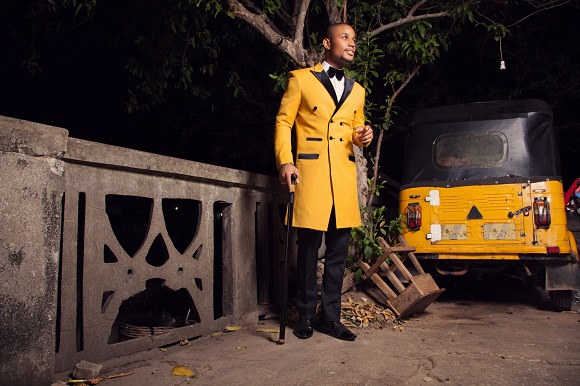 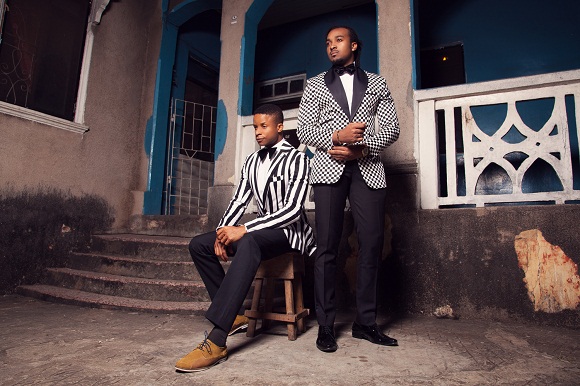 Yevu is an upstart menswear and womenswear fashion brand, taken right from the streets of Ghana and into the marketplace of Australia. The creative director, Anna Robertson, spent a year in West Africa and established a sustainable and ethical brand. Each outfit is handmade by Ghanaian artisans. 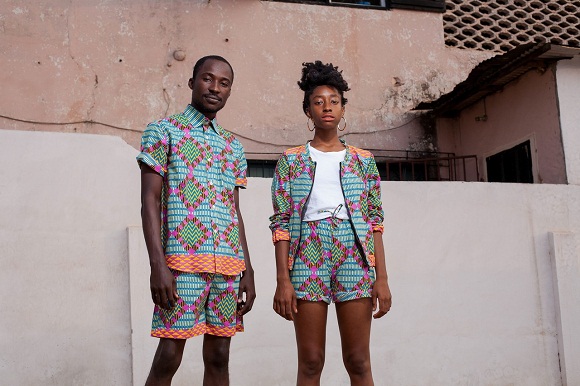 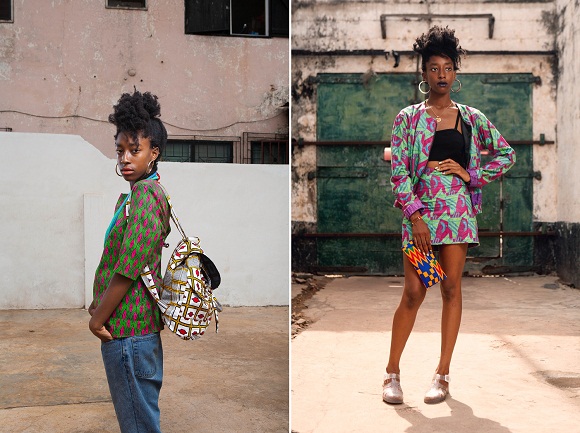 Sawa Shoes is a retro sneaker brand that is 100% sourced and made in Ethiopia. Founded in 2009 in Cameroon, the brand has expanded into international markets and launched an online store. CEO Mehdi Slimani says Sawa is inspired by a ‘vintage attitude’ and he is dedicated to adding value to Africa by supporting the local industry. The premium footwear is available in a variety of styles and fabrics – low tops, high tops, leather, suede and canvas. 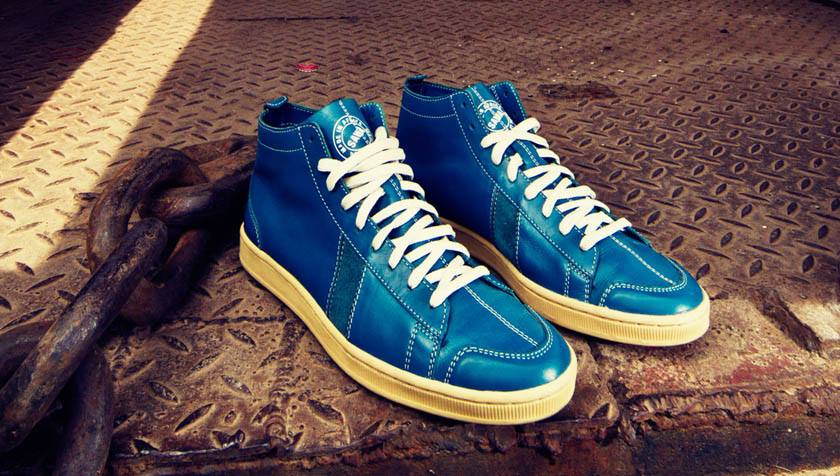 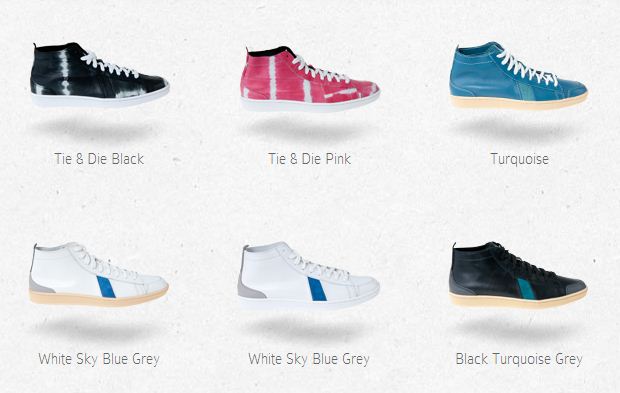 Nigerian Ghanaian designer Anita Quansah launched her own London-based label of statement jewellery in 2006. Her collections have been a huge success, with international magazines like Vogue and Elle featuring her work. Each piece is handmade, unusual and unforgettable.  The latest collection, Silhouette of Power, stays true to the brand. Crystals, shells, feathers, chains, and many more are brought together to create wearable art. 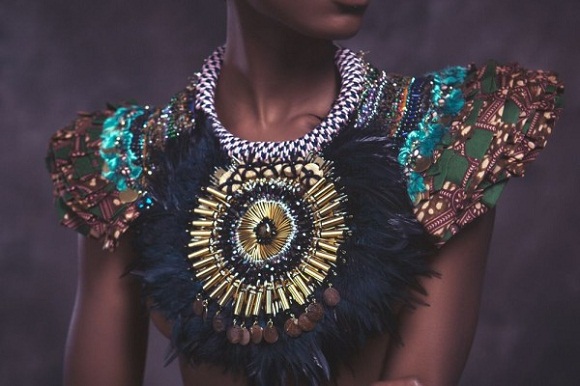 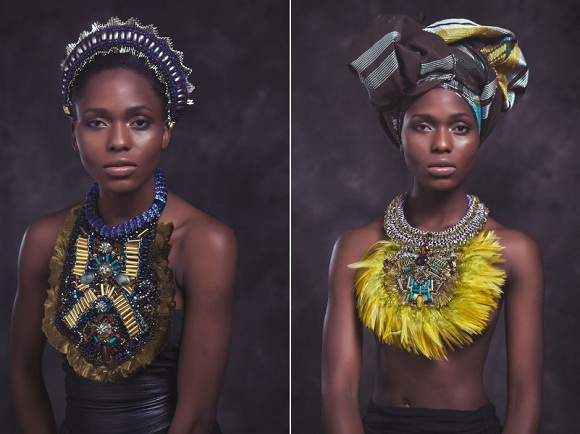 The Wambui Mukenyi label was born in 2009, after the self-taught Kenyan designer branched out from sewing for private clients to creating wedding gowns and ready-to-wear women’s fashion. Her latest collection, Fall 2014, is inspired by minimal colour and simple geometric patterns. 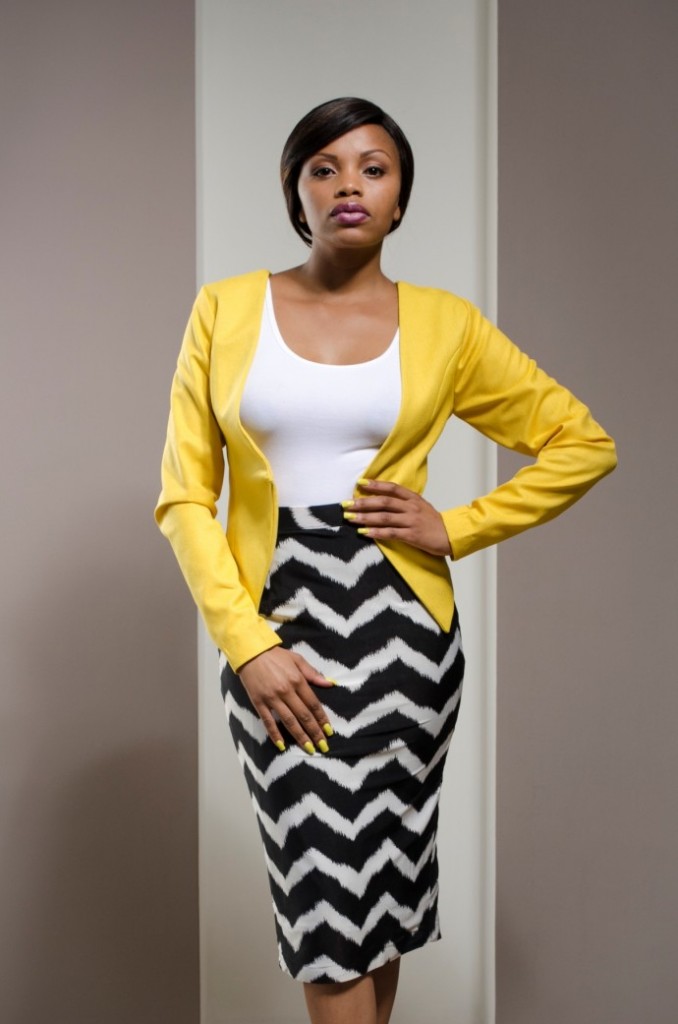 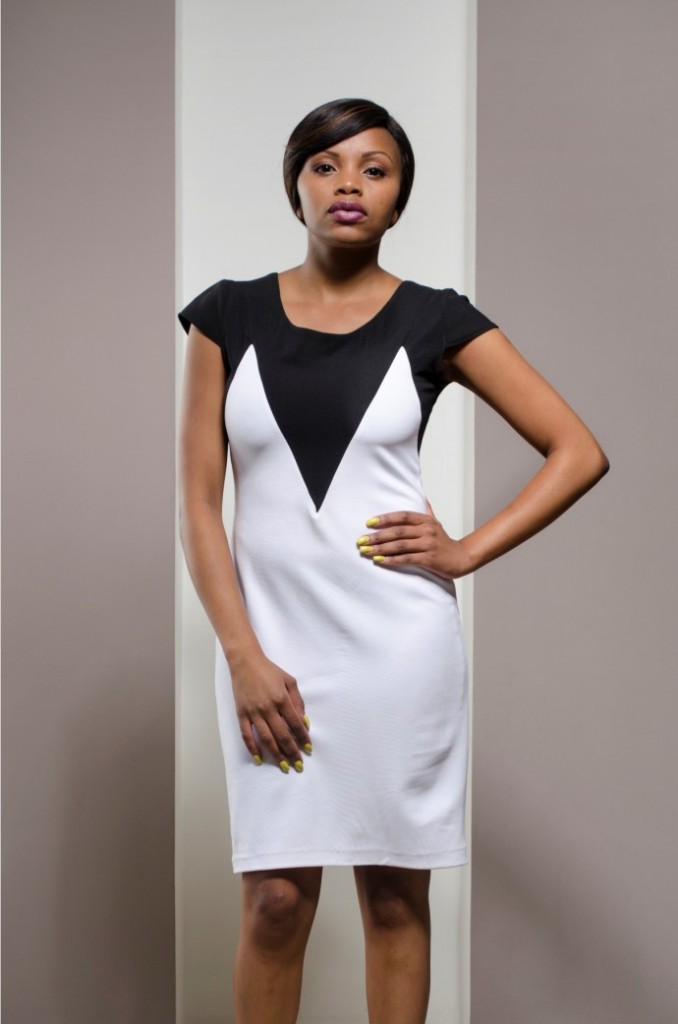 Nyumbani Design is a Tanzanian-based jewellery brand. Their SS14 collection encapsulates the brand’s signature warm-coloured wooden jewellery, all of which are hand-carved with locally sourced wood from many different indigenous Tanzanian trees. This makes each piece unique in some way. The brand, founded by Kerry Glanfield, is inspired by her cultural influence from East Africa, the Caribbean and the Mediterranean. This collection is part of a wood fusion range, dipped in 24 carat gold plating. 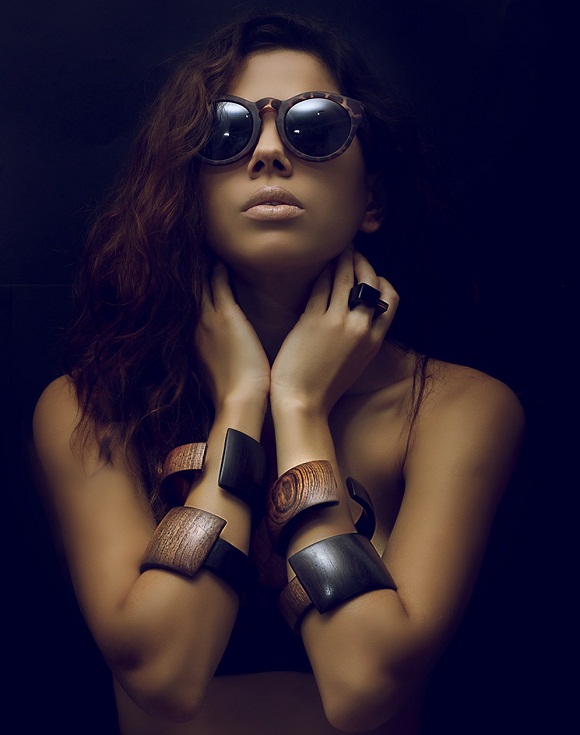 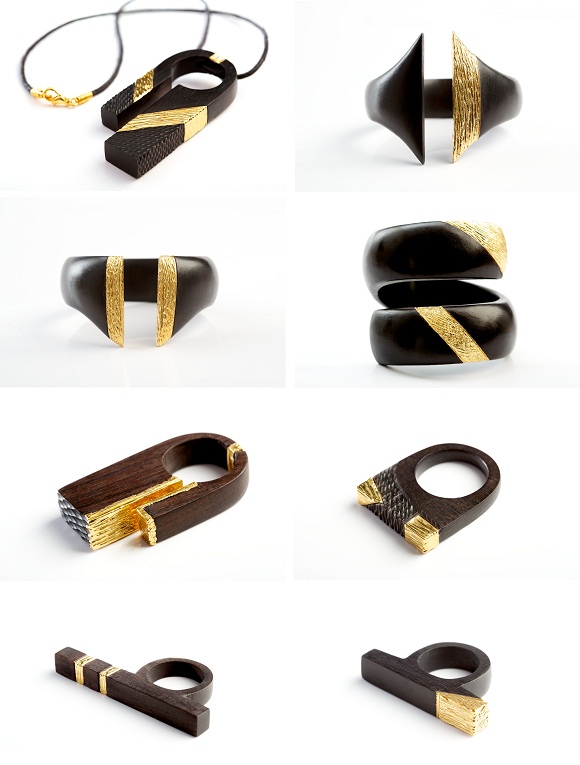 “You can take the girl out of South Sudan but you can’t take South Sudan out of the girl.”

These were the words of international model Alek Wek when Mercedes-Benz Fashion Week chairperson Dr Precious Moloi-Motsepe described her as a “child of the soil” this past weekend.

“Alek’s story is a story that excites all of us. A girl from the continent who was a refugee that went onto conquer the world,” said Moloi-Motsepe.

Wek was in Johannesburg to attend Mercedes-Benz Fashion Week Africa and to also serve as a guest judge at the African Fashion International Africa Fashion Awards.

Speaking at a press conference on Saturday afternoon, Wek, who made her modelling debut in 1995, said that African fashion can change the global fashion industry – and the time for this is now.

“Together we can make a profound change. It gives me chills when I think about it.”

“If I can help in terms of wearing these wonderful designs and by connecting designers so that they have the opportunity to be creative and the international market can have the chance to place an order and see how much talent there is on this continent, then I will be happy to,” Wek said. It was no surprise, then, that she was wearing a dress by South African designer Bongiwe Walaza.

Wek is from the Dinka ethnic group in South Sudan but fled the country for Britain along with her family in 1991 to escape the civil war. She later moved to the United States.

Wek admitted that it wasn’t easy breaking into the fashion industry. People constantly referred to her looks as “bizarre, weird and different” while she has never felt anything but normal.

“From a very early age, my mother embedded in us that as a woman it is not the makeup, the dress or the shoes that makes you the woman that you are. It’s truly who you are inside and if I didn’t have that I don’t know if I would have had the capacity to be able to believe in myself and embrace myself.”

Wek said her mother always told her that as women, one has to respect one another because respect is love.

“We all have different qualities and that is what makes us gorgeous as women. In the end, fashion draws so much inspiration from this continent so why not celebrate the women from Africa?”  Wek asked.

“Once I was out there spreading my wings and having to make my own decisions, everything my strict mother had taught me started to come into place and make sense.

“And whoever said I was weird I could say to them, ‘You’re weird! You’re bizzare!’ There is room for every kind of woman within the fashion industry.”

During her brief talk, she also touched on the importance of education, saying that every young person, regardless of the field they go into, should educate themselves.

Rhodé Marshall is the Mail & Guardian Online’s project manager and unofficial entertainment reporter. She started as a radio reporter and producer in Cape Town, before jumping into online news. With one hand glued to her phone and the other to a can of Coca-Cola, she is a pop culture junkie. Connect with her on Twitter.