In 1987, South African Paul Morris went to Angola as a reluctant conscript soldier, where he experienced the fear and filth of war. Twenty-five years later, in 2012, Paul returned to Angola, and embarked on a 1500-kilometre cycle trip, solo and unsupported, across the country. His purpose was to see Angola in peacetime, to replace the war map in his mind with a more contemporary peace map, to exorcise the ghosts of war once and for all.

Shifting skilfully between present and past, ‘Back to Angola’ chronicles Paul’s epic journey, from Cuito Cuanavale to the remnants of his unit’s base in northern Namibia, and vividly recreates his experiences as a young soldier caught up in a war in a foreign land. 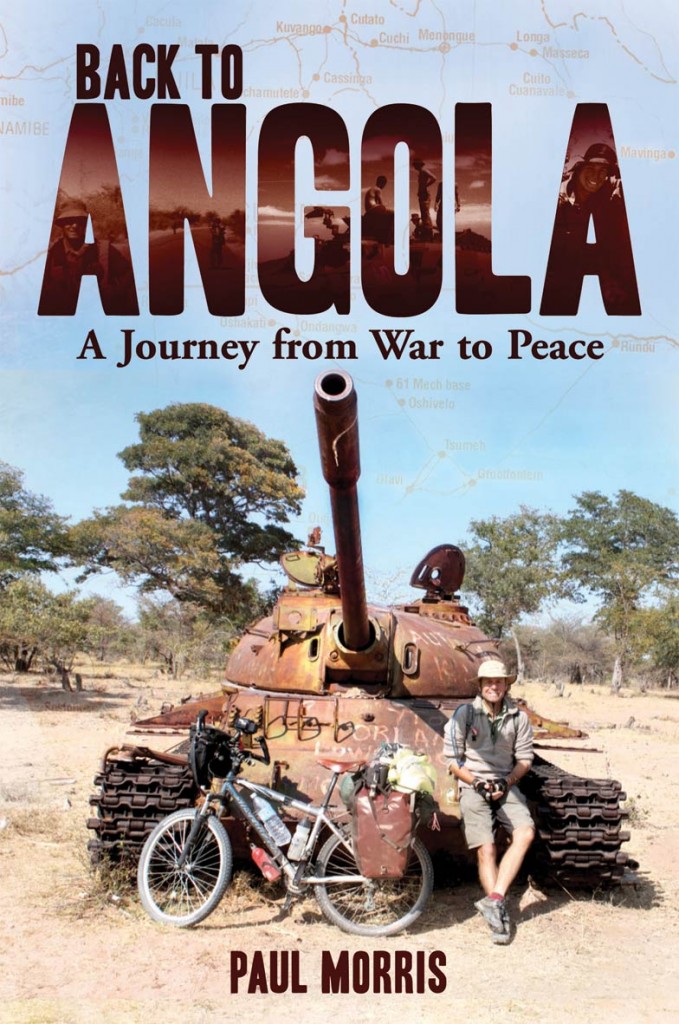 Here’s an excerpt from the book:

I wonder how fucked I’d be if something bad happened. My self rescue plan has always been to hitch a lift to a place where I can find help. There’s no traffic on this road, this bush track; no prospect of rescue. It will be better once I reach Cuchi and the tar road starts again. I hope the advice I’ve received about the tar starting again is accurate, not because I’m not enjoying this quiet track, but because the isolation of it could put me in a difficult situation if I am unable to keep cycling through illness. I contemplate phoning Martin, my doctor friend, for advice. It seems alarmist so I don’t. I battle on alone.

As I move further into the floodplain, I come to the first of several river crossings. A series of channels cut the road. If I were on an unloaded bike I would simply ride across, but I don’t want to risk a soaking, especially because of my camera equipment. A more critical consideration is that a fall could result in injury. I get off the bike and take off my shoes and socks. The water is cold and clear and I can see what I’m placing my bare feet on as I wheel the bike across. On the other side I lay the bike down and put my shoes and socks back on. I repeat the process again at the next crossing.

There’s a man walking next to the road as I put on my shoes after a third crossing. As we talk I realise how weak I am. I struggle to form words and can’t seem to think straight. I’m in worse shape than I thought I was. I sit for a while on the side of the road, feeling frustrated at my slow progress. Hauling myself to my feet, I walk over to a little ford and kneel next to the river to splash my face. I feel like lying in that cold water and letting it wash away whatever poison is debilitating me.

The sun is lowering in the west. I’ve long resigned myself to the fact that I won’t make Cuchi. I’ve been pushing myself, but I can’t go on like this for much longer. It looks like I’m going to be spending the night in the bush. I start riding again and as I crawl along the broken gravel I scan the bush for a potential campsite. I haven’t seen many landmine signs on this road, but the lack of red-and-white warning signs doesn’t mean that there aren’t mines.

This should be a relatively simple exercise, but my brain seems to have slowed to match the cadence of my fatigued legs. It’s so much effort to think about camping that I keep moving. Then a village emerges in a clearing. The quiet of the bush is replaced by the sounds of settlement. The murmur of many conversations is punctuated occasionally by laughter or dogs barking or a call across from one homestead to another. Woodsmoke trickles up from cooking huts made from mud bricks and thatch, the sharp oily scent of it familiar to me.

I call a boa tarde [good afternoon] to some people talking in front of a homestead. It’s a relief to stop here where the track has begun to turn to sand in places. I’m too tired to power through it and too weak to armour my pride against a fall. Two men take leave of the women and walk slowly from the little group of huts that squat behind the log palisade to where I’ve stopped. When they reach me one man hangs back. The first man is obviously interested in finding out about me. We go through the usual dance of words, some comprehended, some not, and he grasps that I am a turista. Sun-hat man is scowling and muttering in the background. The first man says something back to him. I point to my tent and do my best to convey that I’d like to camp somewhere for the night.  Sun-hat is very obviously unhappy about my being here and when he grasps that I want to spend the night his muttering becomes louder and more animated. The first man turns to him and snaps at him. I pick up the word ‘turista’. Sun-hat slopes back towards the homestead complaining as he goes, ‘Problema?’ I ask, starting to become anxious. ‘Não, não,’ says the first man. ‘Não problema.’ It’s the first time I’ve encountered anything like this open hostility. Should I continue and find a wild camp tonight?

I gather that I have to ask permission from the soba, whose homestead I’m given directions to. A young man is tasked with guiding me through the maze of huts. As I haul my loaded bike through the sand, a sow and some piglets scuttle out of my way. There’s the buzz of dinner time about the place. I smell pap and unidentifiable cooking aromas mingled with people sweat and goat shit. Chickens and goats escape between the huts as a handful of wide-eyed, snotty-nosed children follow me at a cautious distance. The old soba has his khaki bush jacket draped over his shoulders. His hair is nearly white and his eyes are milky with age. It’s instantly clear that my staying in the village is beyond question – he is so nonchalant about it, it’s as if I were a regular visitor who passed through every week. A pair of kitchen chairs is brought for us and we sit together next to a little rectangular hut. Conversation runs out within minutes, but we remain sitting together anyway.

I say something about his lovely orange tree. It seems ancient and no less fecund for the years. He says something to a boy of about nine, who is quickly into the highest branches of the tree with the skill and fearlessness of a boy of his age. In a few minutes I’m presented with five oranges. I thank the boy and the old man and begin to eat, not without some concern for my stomach. The sourness of the unripe orange on my tongue is eclipsed by the severe stinging of my sunburnt lips. I battle on gamely until it is finished. To reciprocate the old man’s hospitality, I give him the remains of a loaf of bread I bought in Menongue.

After a while the soba leaves me to attend to some other business. A small gallery of curious young residents has formed at a respectful distance from where I’m sitting. ‘Hello,’ I say to the gathered children. I’m answered by a quiet spread of big eyes. One whispers something to an older girl and she replies. Silence. ‘Como estás?’ I ask. Shy giggles. I smile. Little coughs ripple back and forth through the dust-whitened band. Many of the children’s scalps present scabs caused by some or other ailment. Gradually the members of the little band drift off, called for dinner at their respective homes. The sun sets into the forest and in the remaining twilight a girl of about twelve, wearing a flared skirt, arrives with a grass handbrush and a bowl of water and disappears into the hut outside of which I’m sitting. She sweeps the beaten-earth floor and then sprinkles water on it to keep the dust down. The old man indicates that this is my room for the night.

Close to where I sit there’s a small solar panel about the size of an open laptop charging a mobile phone. The sun is down so the phone’s owner, a man in his twenties, collects it and tramps off again down the sandy lane. Someone else puts the panel away for the night. It happens without fuss or discussion, one of the many daily routines that have claimed my hosts for now.

A little while later I roll out my mattress and sleeping bag and wonder where I’ll find the strength to continue on my journey tomorrow. Somewhere a generator chunters power to a thumping music system and children shriek their delight. I lie down, insert my earplugs and, with the sickly sweet smell of the dust floor in my nostrils, drift into a dead sleep.